This responsive department store façade has a dynamic presence at street level, enriching the public realm with a powerful sense of light and an unusually permeable sense of public space.

THE FACADE AT NIGHT BEFORE THE STORE OPENING 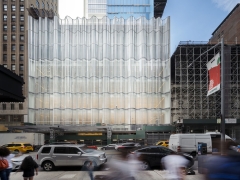 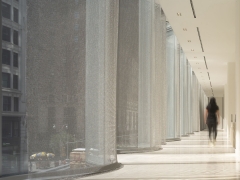 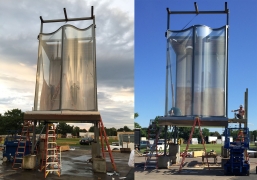 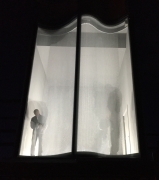 Nordstrom’s first flagship store in New York City primarily occupies a new building spanning 57th and 58th Streets and as well as several buildings existing buildings along Broadway in mid-town Manhattan. JCDA’s unique “Waveforms Façade” contributes a more generous volumetric experience of light within the site’s constrained public realm. The store’s lofted ceilings and entirely glass façade represent the department store’s desire to create a new kind of experience for shoppers. The waveform of the curtain wall serves performance objectives such as allowing for the oversize glass units to span the floor to floor plates without the need for vertical mullions, while the volumes allow for a program that merges civic and commercial goals.

The spaces created by the waveforms create a multiplicity of occupiable spaces populated by displays and explored by shoppers, broadcasting this activity as an extension of the street’s activity and expanding the sense of public space within this dense urban environment. Presenting a subtly veiled quality, the glass is specially treated to articulate a powerful expression of the sky framed by the towers of 57th Street. The passerby experiences the façade’s mutable presence as they approach from a distance – unfolding layered views of the sky, the store’s displays and activity, visually inviting them to envisage the store as a simultaneously accessible and urbane public space.