The project deploys a series of strategic light and spatial interventions that dramatically and poetically engage the experience of arrival and departure.

INTRODUCED THROUGH THE STRUCTURE, LIGHT DEFINES THE ARRIVAL EXPERIENCE

MOATS ARE GLAZED TO BRING LIGHT IN AND, AT NIGHT, ILLUMINATE THE BUILDING

THE COURTYARD IS THE STATION’S ‘GREAT ROOM’

GRIDSHELL STRUCTURES ENCLOSE BOTH THE BUILDING'S MAIN ENTRY AND COURTYARD 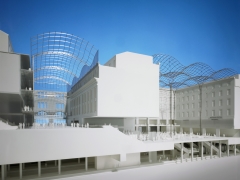 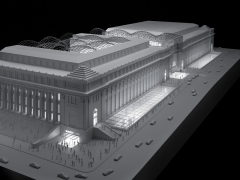 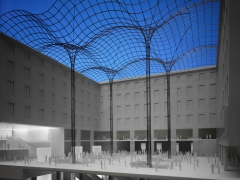 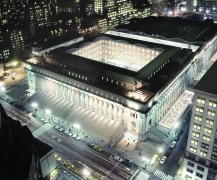 James Carpenter Design Associates, working with HOK, developed the Daniel Patrick Moynihan Station Redevelopment Competition’s Winning Scheme. JCDA proposed light as the primary design principle to transform the McKim Mead and White, Farley Building into a Landmark transit center. JCDA’s design clarifies the thresholds and methods of way-finding that guide the individual through this remarkable building. The integration of poetics into the architecture is intended to elevate the experience of arrival and passage through the building and the city.

As in the original Penn Station, daylight reaches the train tracks to emphasize the city’s presence at the moment of arrival and departure. Demolished in 1963, the image of light penetrating the neo-classical mass of McKim, Mead & White’s Pennsylvania Station is a part of New York City’s collective memory. Today, the building that replaced it serves half a million people daily, more than New York’s three major airports combined. The needs of those using the station and the quality and state of the station is being addressed by the Pennsylvania Station Redevelopment Corporation which has negotiated an expansion that will convert 30% the Farley Post Office to the purposes of Pennsylvania Station across Eighth Avenue. Also designed by McKim, Mead & White and completed in 1900, the Farley Post Office structure was doubled in size in 1935. The large scale and footprint of the building and its major function as a processing facility closed to the public, renders the structure as aloof from public life and street activity.