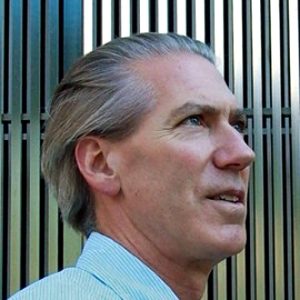 James Carpenter has worked at the intersection of environment, architecture, fine art, and engineering for nearly 50 years, advancing a distinctive vision based on the use of natural light as the foundational element of the built environment. Carpenter founded the cross-disciplinary design firm James Carpenter Design Associates in 1979 to support the application of these aesthetic principles to large-scale building projects.

Carpenter has been recognized with numerous national and international awards, including an Academy Award in Architecture from the American Academy of Arts and Letters and a MacArthur Foundation Fellowship. He holds a degree from the Rhode Island School of Design and was a Loeb Fellow of Harvard University’s Graduate School of Design.

Richard Kress is JCDA’s Design Director and has been a key member of the studio since 1992. Mr. Kress has 30 years of experience with the design of projects at JCDA, including the Museum at the Gateway Arch, 7 World Trade Center Envelope, the Fulton Center Sky Reflector-Net, the Hudson Yards Art Wall, all in New York. Kress has led the design of integrated artworks such as the Salt Lake City Courthouse Artwork, the Nebraska Tower Artwork and the Hearst Ice Falls.

As Design Director, Mr. Kress plays a key role in the studio’s research and development and supports the studio’s design efforts. Mr. Kress holds a Bachelor of Art and Science from the Washington University.

Joseph Welker is JCDA’s Studio Director.  Mr. Welker led JCDA's design of the addition to the Museum at the Gateway Arch below the St Louis Arch and the façade and public spaces of Nordstrom’s first flagship department store in New York City. He led the design elements undertaken by JCDA for the transformation of the Ion, a Sears Building, owned by Rice University and developed as the Houston’s new innovation district hub. Mr. Welker played a key role on 860 Washington Street, a commercial loft building along the High Line in New York City.

Mr. Welker has been at JCDA since 2004 and was previously affiliated with the New York office of Skidmore Owings & Merrill where he was a senior architect on the Columbus Center development team.  Mr. Welker holds a Bachelor of Architecture from Cornell University.

Katharine Wyberg McClellan is a Senior Designer and Project Manager for JCDA. She has been the designer in charge of many of JCDA’s artworks in the last 20 years, including the Lake Light Threshold in Toronto Canada, the University of Chicago’s Midway Crossings, the Devon Energy Art Walls in Oklahoma City and the Light Veil marking the Cotton Bowl in Dallas, Texas. She was the Senior Designer and Project Manager for one of the studio’s largest artworks to be integrated within the Hudson Yards, Manhattan’s new neighborhood. Most recently she has been Senior Designer and Project Manager for the Ion innovation hub building in Houston and the new façade and public spaces of San Diego’s new Terminal One.  Ms. Wyberg McClellan previously worked as a designer at Vincent James Associates Architects and holds a Bachelor of Architecture degree from the University of Minnesota.

Having interned at JCDA in 2015, Allison Wills joined the JCDA team in 2019 as a Project Designer. Allison is a graduate of Cornell University where she received her Bachelor of Architecture with a Minor in Business. Before joining JCDA as a full-time designer she spent three years as an Architectural Designer at Perkins Eastman's New York office.